After a lengthy hiatus, THE NINE OF PENTACLES 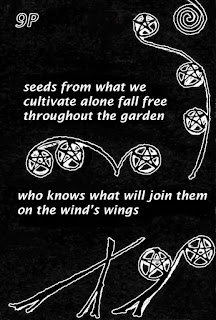 It's hard for me to believe it's been 3 years since my last Taiga Tarot post. And the odd thing is what's brought me back to this effort is another new Tarot deck I've recently returned to designing, The Marker Tarot. As The Marker Tarot also consists of very simple line drawings on black backgrounds, I found myself thinking about the Taiga Tarot more and more often. There's even a small amount of exchange going on between these two decks. For instance, a design that doesn't quite work for the Taiga Tarot may wind up being fine for The Marker Tarot, and vice versa.

Now to today's card, The Nine of Pentacles (9P) above. The 9P has long been one of my favorite cards. I actually tend to like all the cards in any deck, just some a bit more. The Lady on the well-known Rider/Waite/Smith (RWS) version: 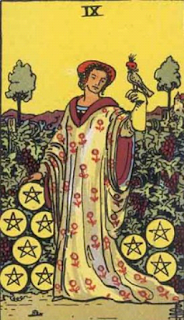 always appealed to my sense of independence, and desire to cultivate creativity in whatever ways I could, in both myself and others. I used this card (decades ago) as the symbol for a series of open poetry readings I organized and led, even calling that series "Kestrel" (after the type of falcon on the Lady's hand/glove). So this card has somewhat more resonance for me than many in the Tarot.

All Taiga Tarot card designs/tanka are in some way dream-based. Unfortunately, the old notes and sketch I found in my file on my Taiga Tarot 9P do not indicate what the dream connection was. And too much time has passed for me to recall it, as I'd probably be able to do had it been only three months and not three years that have gone by. I will most certainly remember to make notes on what the dream connection is for any future card designs. (There is one more old draft Taiga Tarot design in my file without any record of what its dream source may be. That's for the Nine of Wands, which I'll probably post next.)

I've also been through an interesting process in making this newest Taiga Tarot card design. On one hand, I've had to learn some new computer skills to get the text on the image. The old program I used to use could not be up-dated or even copied "as is" to my new computer. Fortunately, I had gotten Photoshop for the first time when I switched to this much better new computer. And so now it's just been a matter of figuring out how to put text on an image using Photoshop.

On the other hand, I discovered (sadly) that my fine motor skills (I believe that's the correct terminology) are not quite what they used to be (I'm pushing 72). In just the time since I last drew a Taiga Tarot design (and also presently in working with The Marker Tarot) I notice a decrease in my control over a pen's lines. The Nine of Wands design that's percolating is going to be quite a challenge given this. But a delightful one, especially now that I have Photoshop as a helper. (The original drawing for the above 9P was done freehand and reversed to white on black as always. Then I applied a Photoshop filter called "ink outlines" that made the sketchy wobbles look more like a chosen style. Or at least, so I'd like to think. :-D)

The Lady on the RWS 9P above will stand as my guide and encouragement for all future Taiga Tarot cards. She must have faced many of her own challenges before standing in her serene and abundant garden, about to send her kestrel off soaring through the sky.

**** [aka: Patricia Kelly]
**** If you wish to copy or use any of my writing, please email me for permission (under “View my complete profile”)**** SEE ALSO: Roswila’s Tarot Gallery & Journal; Roswila’s Dream & Poetry Realm; Trying to Hold A Box Of Light; The Marker Tarot.
Posted by Roswila at 12:37 PM

The nine of pentacles is one of my favorites in any deck. Yours is especially beautiful, the image and the poem, and deeply touches the heart of the gardener in me. Thank you!

It's a delight to have this comment from you. I remember your love of High Valley (is that the right name?) and can just see your mother-in-law (that is who it was those years ago, wasn't it?) taking great care of and joy in it. You, too, of course! The roots of some experiences go deep. And one can hope their seeds fly even farther to also take root. Though we may never know where, I've begun to trust more and more that they do ...