THE ACE OF SWORDS

This one has been on the back burner so long it was practically ashes when I went looking for my notes and sketch. It's based on a line I heard in a dream exactly one year ago: "We are connected by what pierces."

Before I go into more background on the card design, here it is: 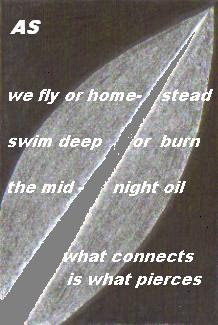 I may re-do this image as it's not quite as clear as I would like. I'm not sure why the contrast is so poor; maybe I'm just over-tired and not recalling accurately how I used to make these images (a distinct possibility). But the design itself I am content with. [Note of February 14, 2010: Having just begun work on a Taiga Tarot design for The Two of Wands, I finally realized the problem. I had forgotten that I draw in the card colors initially in reverse on white paper (e.g., white space where I want black), then "reverse colors" in the PAINT program. And that is what produces the nice clear black and white balance overall. Well, at least the brain cell that had that information was only in a deep sleep, not deceased. :-D Now I can re-do this Ace of Swords and The Fool (2-18-08 post) so they will be a lot crisper looking.]

For comparison here's The Ace of Swords in a favorite deck of mine, The Phoenix Tarot: 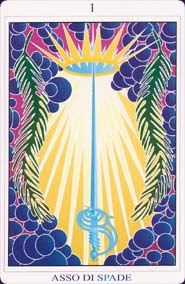 I don't have any more detail on the dream except that it was a spear in the dream. And at the time I knew it was, for the most part, referencing what for me is often the deep pain of empathy with others. It may seem odd to make empathy -- usually understood to be a felt as opposed to a thinking process -- a sword card. However, for empathy to make a difference at all it does need to become conscious, to pierce our awareness, if you will. I also associated this sort of connection to the sword that pierced Jesus's side. That, too, can be seen in terms of connection and empathy.

As I'm relating to The Ace of Swords here there's definitely a sacrifice of sorts. A giving up of anything more than a recognition and bearing up beneath our various connections to others. That is, not necessarily doing anything to rectify or alleviate or deny anything (for self or other), but to bear it, to acknowledge our connections. Which I am beginning to see are constant and pervasive. A magnificent subtle web we are part of, even as we weave our small strands within it.

**** [aka: Patricia Kelly] **** If you wish to copy or use any of my writing, please email me for permission (under “View my complete profile”)**** SEE ALSO: Roswila’s Tarot Gallery & Journal; Roswila’s Dream & Poetry Realm; and DREAMJIN: for Haiku-Like Dream Poems, a Yahoo group.****