As usual it was a dream that precipitated this new Taiga Tarot card design: 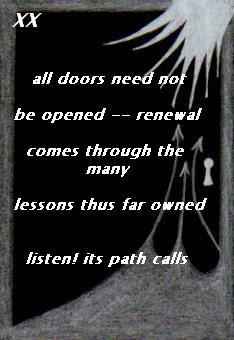 On Apil 26, 2012 I dreamed I was in my old neighborhood back in New York city. I'd heard a new company had jobs available and I thought I should probably apply. I stood before their front door just as a train rumbled by above on the elevated train tracks. I decided to go to lunch instead. As I thought about this dream I associated that rumbling from above to the trumpeting on the more traditional Judgment (XX) card. Here it is in the Rider/ Waite/ Smith deck: 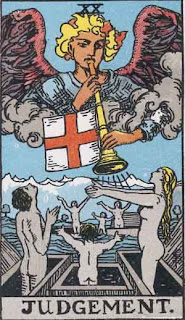 It seemed I was being "called" to something more nourishing (food) than another job, another door to open. Since this "door" was in the past (an old neighborhood) this led me to something I've been nibbling at the edges of for some time. Renewal may not be not predicated on every last issue in one's past being completed and learned from, but on a certain -- shall I say -- critical mass of that sort of inner work. I've certainly been yearning for a renewal, and feeling discouraged and oft times exhausted emotionally. So I began to wonder if this dream was saying to listen, rewewal may be already calling. At that point I realized I was also beginning to work on XX in The Taiga Tarot.

With respect to this project, I did a bit of prioritizing a few nights ago using The Tarot. I have many, many different projects, some creative, some pragmatic and was wondering which needed addressing sooner rather than later. The Taiga Tarot came up as of the highest priority (which was quite a surprise). It was also clear that although I cannot rush The Taiga Tarot, I can take the time when I feel those little nudgings and urgings to make notes and sketches. No matter how many other projects are awaiting my attention.

Following along with the message from The Tarot that The Taiga Tarot is a high priority in my life, I should mention that I've now also got a design for The Nine of Wands percolating. It should be up in a day or two.

**** If you wish to copy or use any of my writing, please email me for permission (under “View my complete profile”)**** SEE ALSO: Roswila’s Tarot Gallery & Journal; Roswila’s Dream & Poetry Realm; Opening to the Light (for digital pix only); and DREAMJIN: for Haiku-Like Dream Poems, a Yahoo group.****

Posted by Roswila at 9:54 PM No comments: